“The final battle between the Lord and the reign of Satan will be about marriage and the family. Don’t be afraid … because anyone who operates for the sanctity of marriage and the family will always be contended and opposed in every way, because this is the decisive issue … however, Our Lady has already crushed its head”

You would have to be totally disinterested to fail to note that something is very wrong with the Christian Church today.  Good is often called evil and evil good.  The devout are mocked and the unrepentant and proud praised.

This time has been foreseen by many Saints and of course Our Blessed Lord Himself when He asked if there would be any faith remaining at the time of His return.

“Ape-Church” or “nuChurch” co-exists with the same buildings and administrative structure as True Church.  The enemy (the devil) has been temporarily successful at keeping those who hold fast to the Old Faith (Scripture & 20 Doctrinal Councils) scattered.

There are many good and holy clergy and laity in the “mainstream” Church or other traditions preserving valid apostolic succession and our intent is not to insult or detract from them.  There is only One Catholic Church.  One Faith, One Lord and One baptism.

Though most scholars agree the novus ordo Mass is valid when said properly it has serious deficiencies and accommodations designed to make it more Lutheran.  You may think this is what Our Lord wanted in order to further Christian unity or you may be horrified, but either way if we were to take any Saint pre-1960 and transport 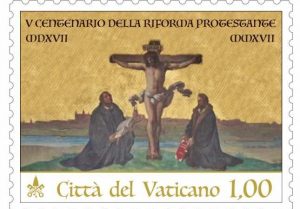 them across time and space to visit a typical Western Catholic parish they would be hard pressed to see it as Christian in many cases, let alone Catholic.

The image to the left is a recent Vatican stamp replacing Our Blessed Mother and St John with Luther and a minion.  If you do not see anything wrong with this- please go in peace.  I can offer little for you here.

The two major earthly sources of attack of nuChurch against Church are Freemasonry and Communism.  Whether we are dealing with people or ideas formally attached to a lodge or political party is irrelevant.  The ideas behind these things have percolated into the Roman Catholic Church over the past 100+ years.  The goal is to change the focus from God to man.  To forsake and scorn Divine Providence and attempt to build a human utopia in contradiction to Our Lord.  A rude gesture to the profound gift and reality of the Incarnation: Word made flesh.

We’ve mentioned the two main philosophical sources and now pay attention to their targets. The two main targets are the Holy Mass and marriage & the family.  You don’t have to be a theologian to see this.

Consider what the Church approved apparition of Our Lady Of Good Success warned of THIS age:

“Thus I make it known to you that from the end of the 19th century and shortly after the middle of the 20th century…the passions will erupt and there will be a total corruption of morals… As for the Sacrament of Matrimony, which symbolizes the union of Christ with His Church, it will be attacked and deeply profaned. Freemasonry, which will then be in power, will enact iniquitous laws with the aim of doing away with this Sacrament, making it easy for everyone to live in sin and encouraging procreation of illegitimate children born without the blessing of the Church … In this supreme moment of need for the Church, the one who should speak will fall silent….”

“How deeply I grieve to manifest to you the many enormous sacrileges – both public as well as secret – that will occur from profanation of the Holy Eucharist. Often, during this epoch the enemies of Jesus Christ, instigated by the Devil, will steal consecrated Hosts from the churches so that they might profane the Eucharistic Species.”

These things are unfolding as we speak.  As many “mainline” Catholics are replacing the Faith of their ancestors with variants of Marxism making “‘progress’ of man” their god and “social justice” their sacrament.

Under the guise of the corporal works of mercy they have created for themselves a nuReligion devoid of the transcendent and in mockery of the First Commandment.

Hold true to Sacred Scripture, the Councils, the old Catechisms and the Faith of the Saints, if anything opposes this, even if it be a bishop or pope, it is not of God.

“[Satan] will set up a counterchurch which will be the ape of the [Catholic] Church … It will have all the notes and characteristics of the Church, but in reverse and emptied of its divine content.”

Christ’s Church the Catholic Church will be one; and the false Prophet will create the other.

The False Church will be worldly, ecumenical, and global. It will be a loose federation of churches and religions, forming some type of global association.

A world parliament of Churches. It will be emptied of all Divine content, it will be the mystical body of the anti-christ. The Mystical Body on earth today will have its Judas Iscariot, and he will be the false prophet. Satan will recruit him from our Bishops.

The Antichrist will not be so called; otherwise he would have no followers. He will not wear red tights, nor vomit sulphur, nor carry a trident nor wave an arrowed tail as Mephistopheles in Faust. This masquerade has helped the Devil convince men that he does not exist. When no man recognizes, the more power he exercises. God has defined Himself as “I am Who am,” and the Devil as “I am who am not.”

The pre-Communist Russian belief is that he will come disguised as the Great Humanitarian; he will talk peace, prosperity and plenty not as means to lead us to God, but as ends in themselves …

The third temptation in which Satan asked Christ to adore him and all the kingdoms of the world would be His, will become the temptation to have a new religion without a Cross, a liturgy without a world to come, a religion to destroy a religion, or a politics which is a religion–one that renders unto Caesar even the things that are God’s.

In the midst of all his seeming love for humanity and his glib talk of freedom and equality, he will have one great secret which he will tell to no one: he will not believe in God. Because his religion will be brotherhood without the fatherhood of God, he will deceive even the elect. He will set up a counterchurch which will be the ape of the Church, because he, the Devil, is the ape of God. It will have all the notes and characteristics of the Church, but in reverse and emptied of its divine content. It will be a mystical body of the Antichrist that will in all externals resemble the mystical body of Christ … ”